​This is a project by Claire Mikalauskas (Creator), Chantelle Ko (Artistic Producer/Props Designer), Tauran Wood (Lights and Sound Designer), Lora Oehlberg (Computer Science Faculty Advisor), and April Viczko (Drama Falculty Advisor). We planned to have a performance with these props and three improvisers, called "Props Alive!". It was going to be at the Alchemy Festival as a combined double bill show with "Improvised Design Futures", which is where improvisers and interactive designers work together and play improv games to design new theoretical objects of the future. Kathryn Blair was the artistic producer of that half of the show, and Zachary McKendrick was the director of our combined show. Unfortunately the Alchemy Festival was cancelled due to COVID-19.

It started with Claire's Masters thesis in Computational Media Design. She performed an HCI study to create guidelines to make augmented props for improvised theatre. The guidelines are:
My role in the project was to make the props and the computer interface. Tauran's role was to setup the lights in the theatre and make a Qlab project to trigger them and the sound.  These props are to be used by actors to control the theatre lights and sound in real time. In terms of input, the chain of data is as follows:
Actor => Sensors => Arduino MKR1000 => Computer Running Max MSP Client Patch (or the standalone application) => Qlab => hardware for the lighting and speakers in the theatre.

There are 6 props in total. Each of the props are using the Arduino MKR1000 to send their sensor data wirelessly via OSC to Max MSP. Within Max MSP, the data is averaged, and thresholds are placed to trigger OSC strings that are appropriate for Qlab. There are also delays setup to prevent excessive triggers from the same gesture, within a set timeframe between 0-8000 milliseconds. Max MSP was chosen over other programming languages because of its features to make an intuitive user interface and standalone application. Once the interface was finalized, the user does not necessarily need to understand how to program or code in order to operate it. All of the props, with exception of the Box, have a 3D printed case of the Arduino and lipo battery.

Unlike musical instruments, theatre props do not necessarily need to be aesthetically pleasing. Audience members already suspend their disbelief, so a tacky looking prop that is held together with tape holds the same creative potential as one with a robust design. At the present stage of our study, it is more important to give the actors a choice between as many props as possible than to have a really robust and aesthetically pleasing prop. In future work we will ask actors if there needs to be any design changes to the props.  There are also long wires on some of the props because I wanted to ensure I have extra space to move the placement of sensors if need be.

The Horn uses a bidirectional flex sensor attached to the rubber bulb. When squeezed, Qlab turns off any lights that were currently on. If the Hula Hoop is being interacted with simultaneously as the Horn, the Horn then becomes a “car horn”.

The box was originally made by Brandon Goberdhansingh, as the first prop. It did not need a 3D printed Arduino case because all of the electronics were strapped or taped to the inside of the box. It also has a bidirectional flex sensor attached to one of the opening flaps. When the box opens it turns on a spotlight, as well as trigger a “magical” sound. The Box also has an Adafruit BNO055 absolute motion sensor.

The Sword was made by 3D printing the hilt and sliding it onto a metre stick. Its physical design is based from a right handed metal practice sword used in Scottish Highland Dance. Making the Sword this way, instead of buying a sword, was more cost efficient as well as eliminating the risk of shorting out the electronics with a metal sword. A circular FSR is placed on the hilt to recognize when the sword is being held. It currently is programmed to sound like a lightsaber. Two long FSRs are on either side of the blade to sense when the Sword “hits” an object. They trigger lightsaber blasting sounds, as well as make lights flash. There is also a Sparkfun LSM9DS1 sensor stick. When the sword is held upright, sideways, or down, the orientation triggers lightsaber waving sounds.

The Umbrella’s Arduino and battery case is screwed onto the top of the umbrella. This placement was chosen in order to avoid wires being tangled in the opening and closing mechanism. A conductive rubber stretch cord is insulated with felt and tied to the inside frame. When the cord is stretched, or relaxed, the program recognizes when the Umbrella is opened or closed. It also has a Sparfun LSM9DS1 sensor stick to recognize when the umbrella is held up, sideways, or down. When the Umbrella is opened it dims the lights, as well as start playing a random sound file in a playlist. Sounds include rain ambience, as well as pop songs with lyrics that are about rain or umbrellas.  When the umbrella is tilted sideways it turns down the volume of whatever sound or song is currently playing, as well as triggers thunder and flashes the lights. When the Umbrella is then pointed back upright, the volume of the sound or song comes back up.

On either side of the Arduino and battery case there are two strips of copper tape placed on the hoop. They are touch sensors by using the conductivity of a person’s hands to complete the circuit. The programming in Max MSP is setup that it recognizes when each of the left and right sides are touched, let go, and when neither side is being touched. When either side is touched, it triggers car racing sounds and only when both sides are let go, do they stop. The Hula Hoop also has an Adafruit BNO055 to sense when the case is pointing up, down, left, and right. When the sideways motions are triggered, the start car crashing sounds. 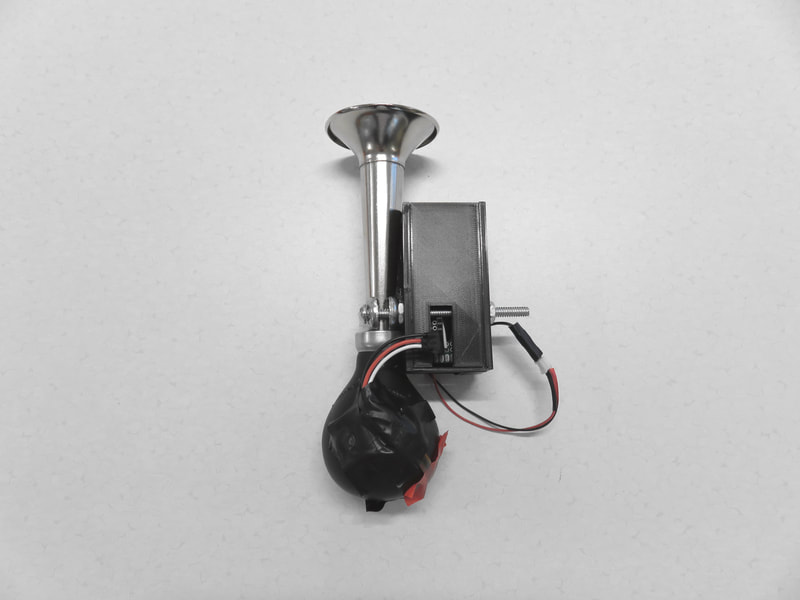 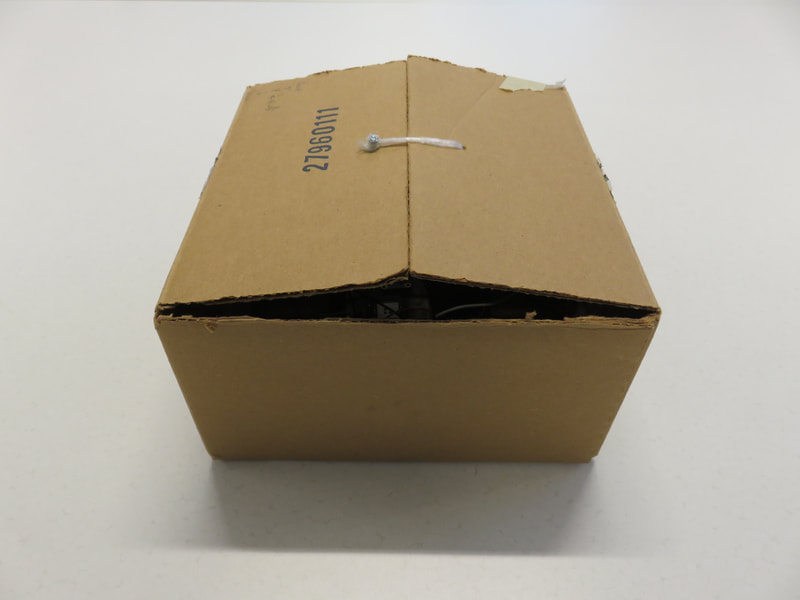 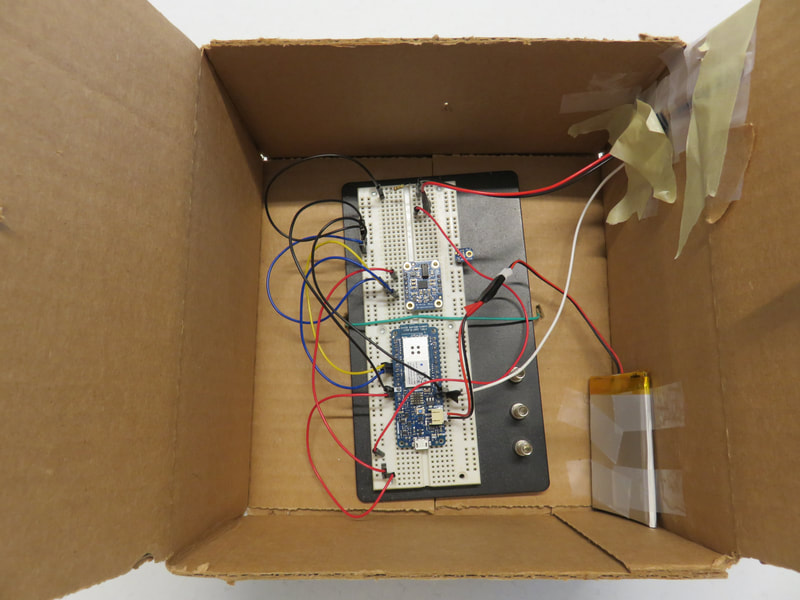 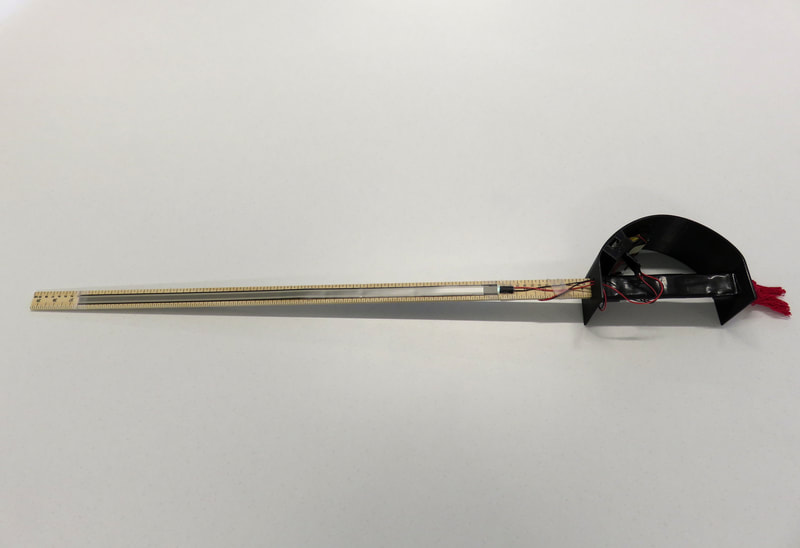 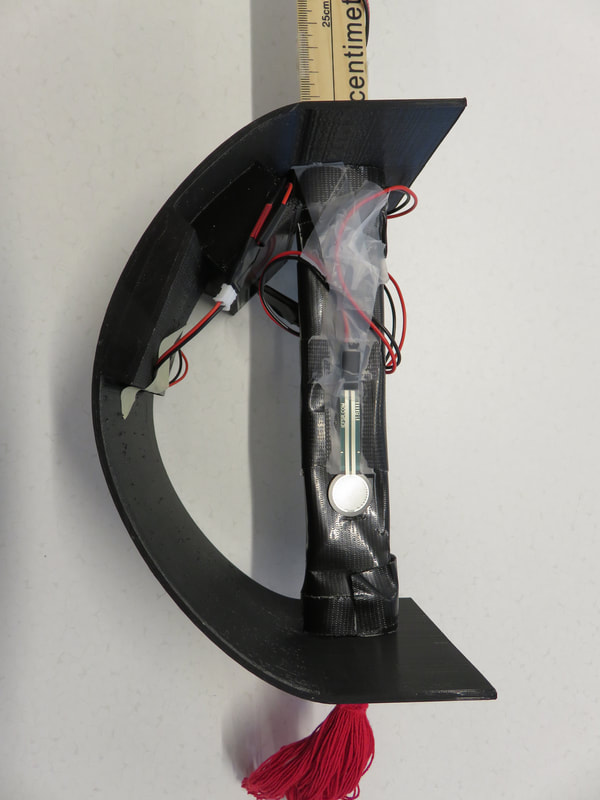 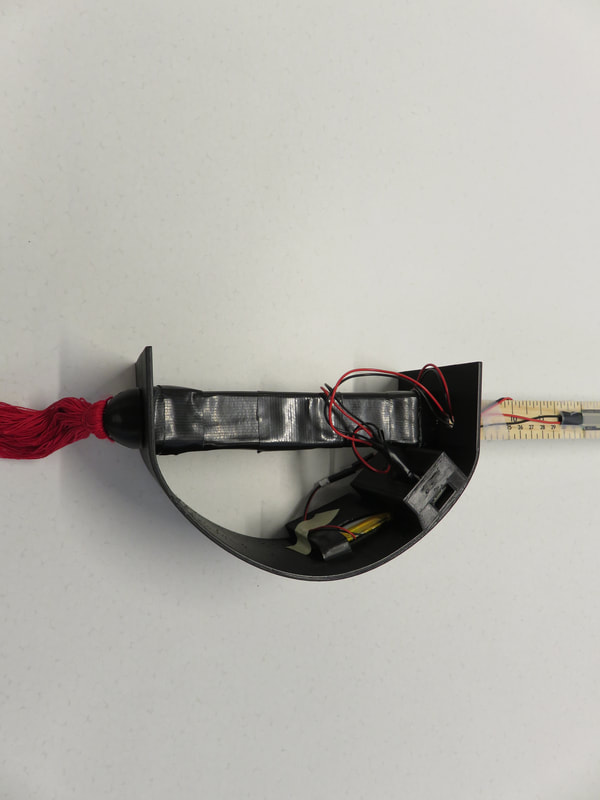 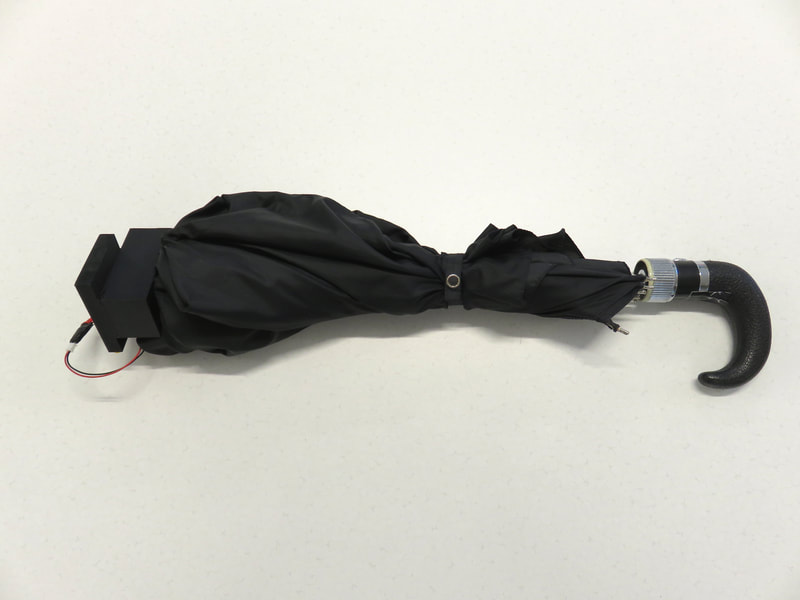 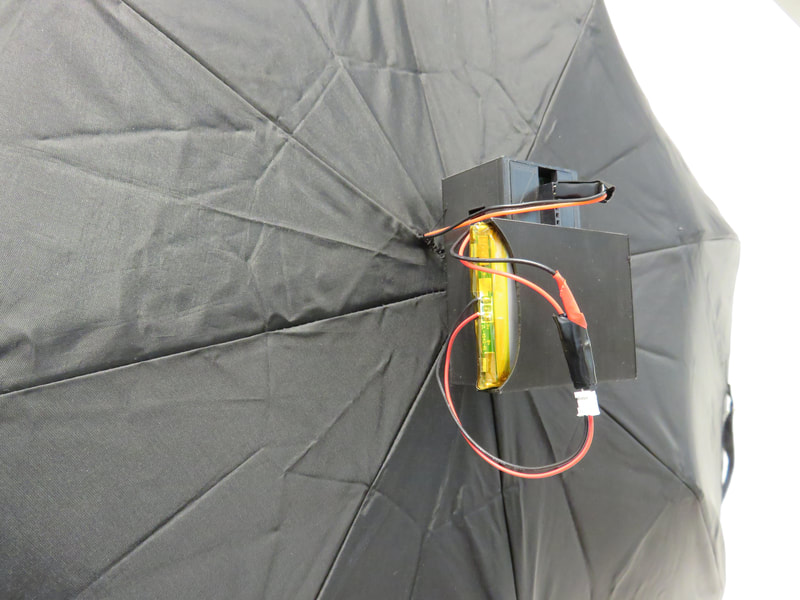 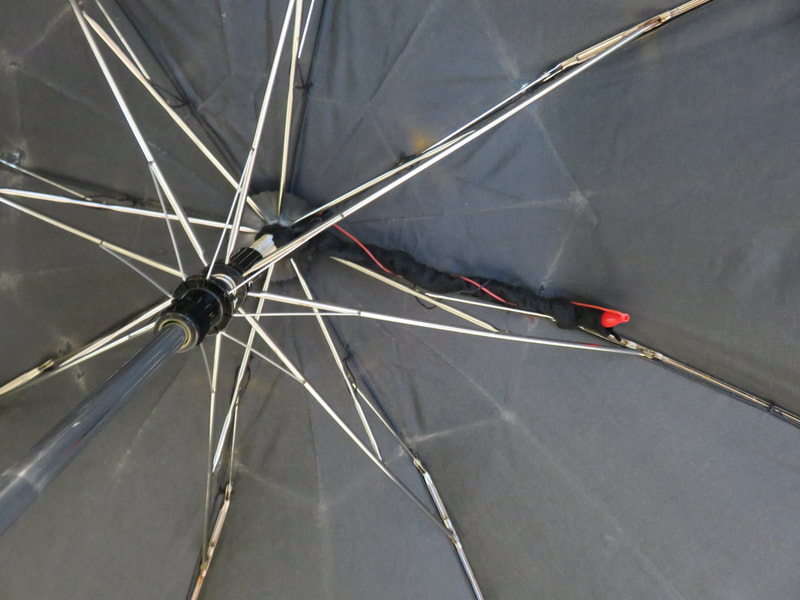 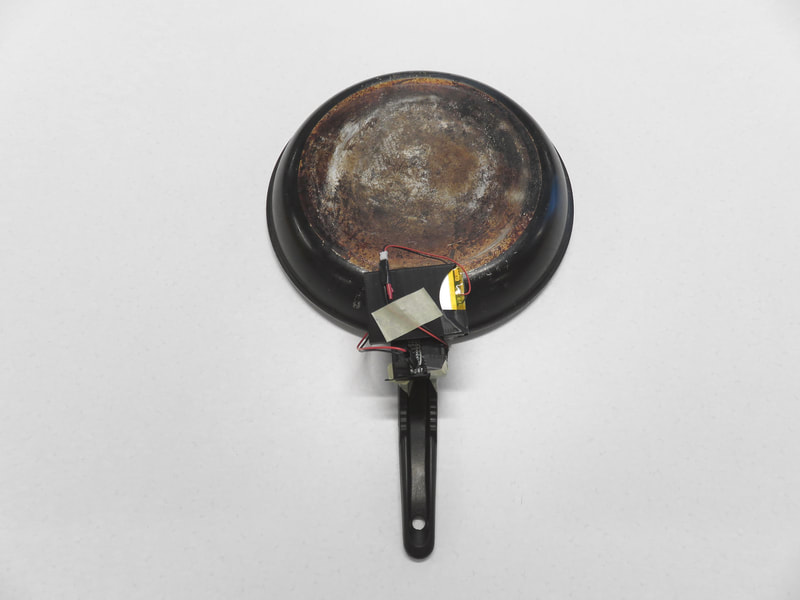 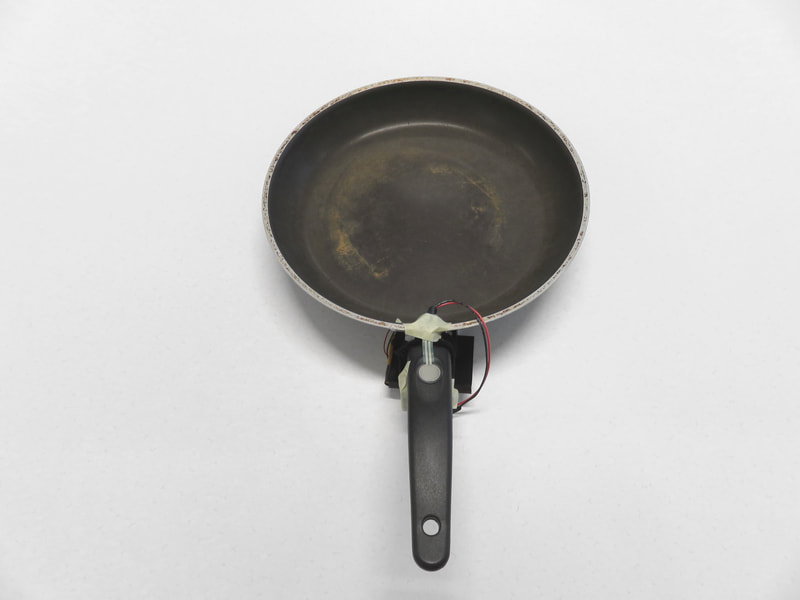 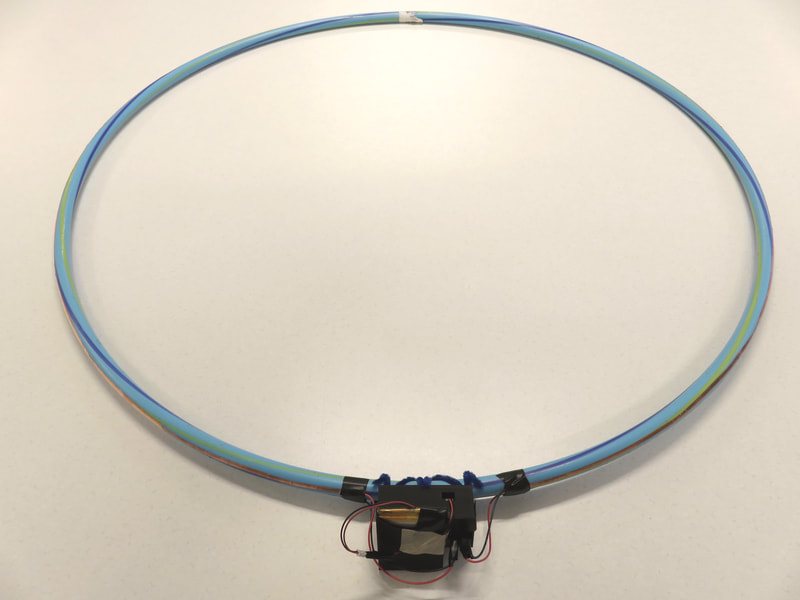 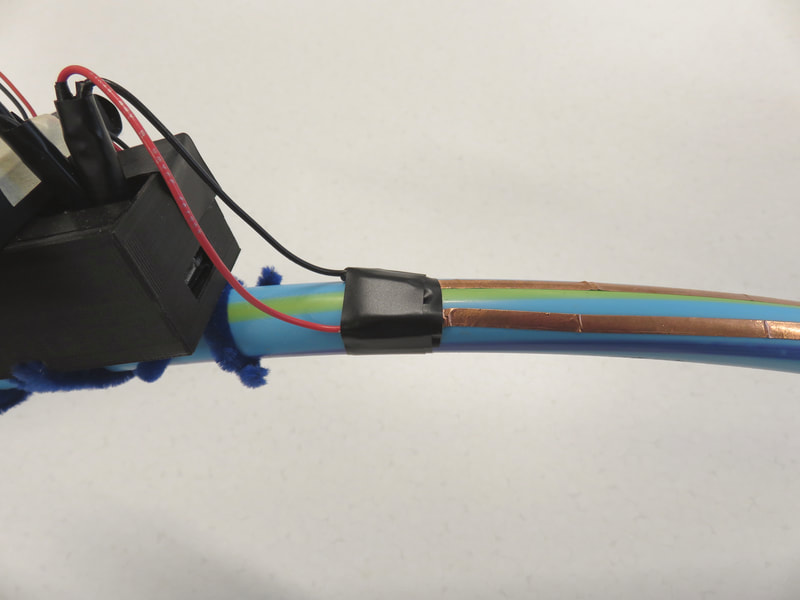 We anticipated having better demo videos with the augmented props and professional actors in March 2020. However, the show we had planned was cancelled due to COVID-19. Therefore, we only have a few videos of when we tested the umbrella and sword props (they were my favourite at the time).